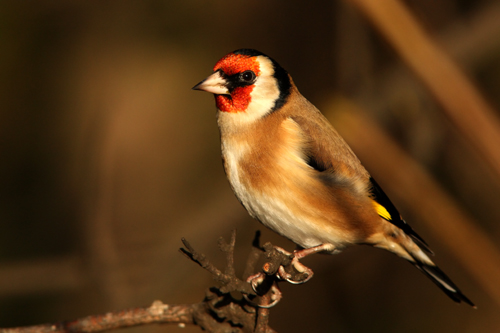 Goldfinch, Co Antrim
All that Glitters...
The introduction of nyjer seed to the feeding station during the recent cold weather had the desired effect with a small flock of Goldfinches now regularly visiting the site. These are real gems of the bird world and a favourite of mine. The bright red face mask and bright yellow wing feathers make this species unmistakable. It’s scientific name Carduelis carduelis comes from it’s preference for thistle seeds (the Latin name for the thistle family is carduus). This obviously makes it a species of open country and woodland, an increasingly urban areas.

This popular species is found across most of Europe, extending into North Africa and western and central Asia. Birds from Northern Europe are migratory, moving south for the winter, western European birds are less migratory, especially males which are likely to stay closer to their breeding areas. It’s look made this a common species with cage bird enthusiasts, as result escapes and releases have occurred around the world and it has colonised parts of Australia and New Zealand.

The sexes are broadly similar though males can often be distinguished by a larger, darker red mask that extends just behind the eye. Its call is a pleasant tinkling medley of trills and twitters.

Nyjer seed can be quite expensive, but worth if you can attract these beauties in. In recent winters I have counted more than 60 coming to a feeder in Ballycastle.