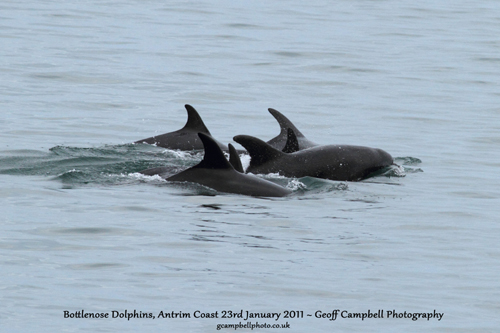 Six Bottlenose Dolphins, Antrim Coast
Surprise find 2
This was turning out to be a good weekend, and hadn't really gone anywhere yet. Sunday's forecast looked ok so I would decide in the morning where to go. Perhaps Donegal for the Otters?

I got up early(ish) on Sunday looked out to another grey sky - no point going too far then if the light wasn't going to improve. After a more leisurely than planned breakfast the weather hadn't improved much. At least it was dry so I would go somewhere.

Glenarm to look see if the Black Guillemots were back and a look at some of the bays and rivers on the way down was the decision.

Ballycastle Bay was quiet and no sign of the drake Goosander on the river. A brief sighting of a Red Squirrel near Cushendun brightened my mood, though the river and bay here were quiet. A walk at Waterfoot beach produced a couple of Bullfinch feeding on Sea Buckthorn, but the light was poor.

Going through Waterfoot - more Waxwings, 21 of them, feeding on berries near the primary school, things were looking up.

Perhaps Carnlough might have a few waders? Before I even got there my plans for the morning had changed. Whilst driving the beautiful Antrim Coast Road I spotted the unmistakable shape of Bottlenose Dolphins just offshore. A grabbed a few quick shots before making the decision to travel south and get ahead of them. Sure enough they continued to track south staying close to shore, so I got a few more shots just north of Glenarm.

Quickly I made way to small headland to the south Glenarm village and waited, watching as they sped across the bay towards me, still only some 30-50m offshore at times. By now a few other people had seen them and had started to follow them south.

By the time we had reached Ballygalley there were more cars in the convo,y than the twenty or so Dolphins, with the normally busy Coast Road at a near standstill with fascinated onlookers. It was wonderful to see (and feel) the excitement in these beautiful creatures being so close. Especially when some of the younger members of the pod jumped clear of the water.

I followed the Dolphins to just north of Larne before it was time to head home. A truly wonderful experience, that I think all (except perhaps the occasional drivers who were getting held up in the traffic jams) who experienced would agree.

Thankfully Bottlenose Dolphins are being seen more often along the Antrim coast, though not always so close inshore! For more information on Dolphins and recent sightings visit the Irish Whale and Dolphin Group website - see the links page on this site.