Donegal At Its Best 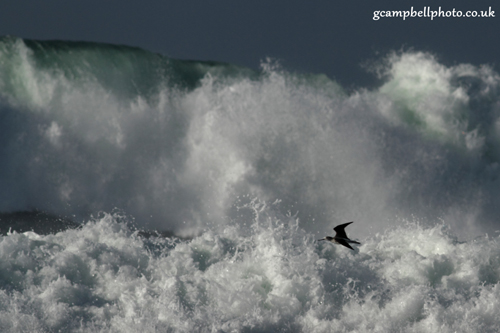 Greenshank in the Surf
Birds and Landscapes
A last minute decision saw me leave a grey and overcast Ballycastle last Sunday morning for a rare trip this year to North Donegal. The Inishowen Peninsula was my target destination. By the time I had reached Coleraine the sky had started to clear, though this was to be short lived.The grey drizzle was replaced by grey mist – thick grey mist. I decided to give Inch Lake a miss, because I could barely see it, never mind it’s wildlife. Hoping it would be clearer further north I travelled through Clonmany to Tullagh Bay and Dunaff, to look for sea ducks. As the coast got nearer so the mist cleared to leave a clear blue sky. The North Atlantic had been severely ruffled by recent winds, creating huge waves offshore forcing the Eider, Mergansers and Divers closer to shore in more sheltered bays.

This allowed me to find my first good bird of the day, a drake borealis race of Eider. This northern form of the common Eider can sometime be found in north Donegal told from its local cousins by an orangey bill and small “sails” on its back formed by stiff scapular feathers. Another sighting which appeared out of place was a female Scaup amongst a flock of Red breasted Merganser.

A quick stop in Malin village produced a distant view of a Little Egret which has been present for some time and a small flock of Barnacle Geese just north of the town. Chough were conspicuous by their absence from the area around Lagg/Five Fingers Strand. More Barnacle Geese were close to Malin Head, whilst well offshore a large flock of returning Gannet were diving for food. Despite watching for a while no signs of whales or dolphins in the area could be found, though sea conditions were poor.

A visit to the shore near Killourt was truly breath taking. Huge waves crashed onto the storm beach and against the cliffs here. I spent several hours watching and photographing these monstrous seas (see latest images) hoping to get a bird in flight set against the spectacle of the crashing waves. Just as I was about pack up a Greenshank flew right in front of a wave, I managed to get the camera onto it an get one sharp image before it rose up and away.

Travelling south I just had time for a quick stop at Malin town again. The Barnacle Goose flock had increased in size since the morning and more Brent had joined them. Amongst them I found a small Canada Goose. The Canada Goose is a familiar park bird but these larger birds are a collection or feral bird. This smaller ‘parvipes’ type Canada Goose is likely to be a wild vagrant. In Malin town there two Little Egrets were now present.