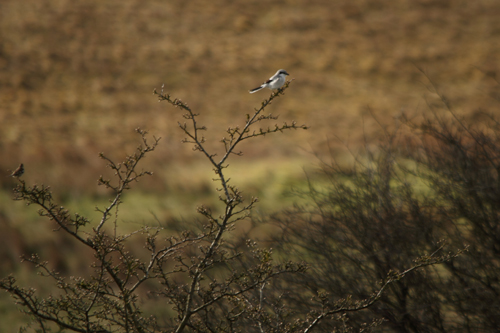 Great Gery Shrike, Slievenacloy
The Attraction of Rare Birds
In my younger days I have to admit that I did do some chasing around after rare and unusual birds. These days though I am normally much happier photographing more common or expected wildlife closer to home.

In the past few weeks though there have been two birds found which have definitely got my attention and the urge to go and see them. The first was a White-winged Scoter found on the coast of County Kerry. The costs, logistics and time commitment though are completely out of the question on that one I am afraid.

At the end of last week though a bird closer to home had all the attraction without having to leave County Antrim. A Great Grey Shrike was found at the Ulster Wildlife Trusts Slievenacloy Nature Reserve in the hills north of Belfast. Work commitments meant getting up there on Thursday and Friday was out the question. So early(ish) on Saturday I set off and wasn't disappointed.

These stunning bird breed in Scandinavia and continental Europe and are regular though scarce winter visitors in England and Scotland. They are however very rare in Northern Ireland with only four confirmed records in the 20th Century.

Sometimes known as the butcher bird they live on beetles, insects and sometimes small mammals and birds. Often they will impale their prey on a thorn or spike, forming a larder which they can feed from in the future.

Unfortunately from a photography point of view I never got an opportunity to get close enough for a decent shot, but it was great to watch hunting and flitting between bushes. Over the three or four hours I was there caught with few friends and acquaintances and hopefully made some new ones. Birders from almost every part of Ireland have made the journey up to see this bird.

Following a morning at Slievenacloy I made a quick visit to Stoneyford reservoir were there at least two singing Willow Warbler, Great Crested Grebes and Shoveler. On the way home I had an unsuccessful visit to Slemish to look for a male Ring Ouzel which had been present and giving amazingly close views earlier in the week. Though 8 or so Wheatears, several Ravens and a Kestrel did partially make its absence.

Hopefully if the Shrike stays I will get up later in the week and get some better images.