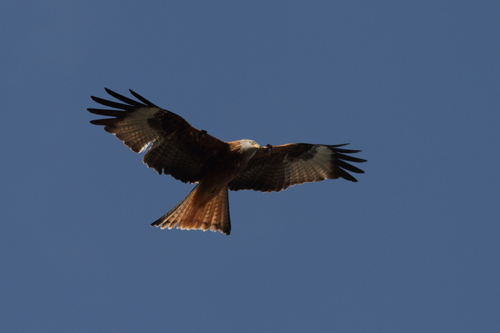 Red Kite, Downpatrick
Motocross Raptors
Another Saturday, another motorcycle race. This time I was just outside Downpatrick on a glorious spring day. Not the setting for one of the best wildlife experiences for a while you would think.

As soon as I arrived at the track I noticed the raptors in the air nearby. Usually there are a pair of Buzzards close to the track, but these weren’t Buzzards, these were Red Kites – at times three of them circling not too far away. Whilst the racing happened, and between taking photos of course, I kept on an eye on them as they got harassed by the local corvids, including a couple of Ravens.

During the lunch interval I decided to walk along the local roads to get a little closer, but I never seemed to get close enough for a really nice image. As the bikes fired into life it time to get back to ‘work’, but I was always conscious of being watched from not too far away. As the afternoon drew on and during one of the main races one Kite flew low over the track only 20 or so metres above the crowds heads, completely unperturbed. In fact after getting a few shots I looked around and reckon as many people were watching the Kite and the bikes!

It was interesting the number of people, even I would not expect to be who were genuinely fascinated and engrossed by these amazing birds. Several started asking me about them, in fact many new quite a lot about them anyway.

The Red Kite was absent from Northern Ireland for 200 years after persecution drove them extinction. A reintroduction programme started in 2008 has seen 80 birds release, under licence, to the south Down area and the birds are now successfully breeding. Red Kites are primarily scavengers and are therefore of little threat to farm animals. Each birds is wing tagged with their own colour and letter combination and they are fitted with radio transmitters so they can be closely monitored.

Over the day three Kites were seen, as well as three Buzzards, two Ravens and a Sparrowhawk – not bad for a motorbike race!