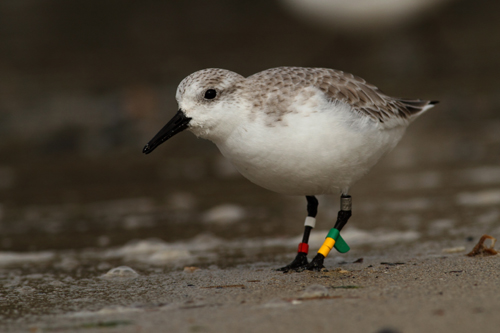 Sanderling, Portballintrae
A Familiar Wader
With fine weather for much of the week I was pleased that I was due to off on Friday. When I woke though I was disappointed to see cloud - lots of cloud and it didn't look like it was going shift. Still I have to make the most of my time with the camera.

There was little point in travelling too far so having attended to a few appointments in the morning it was off along the north coast. Portstewart can be an excellent location for watching Turnstones and occasionally Purple Sandpipers and both species were present and behaved themselves for photographs. Unfortunately the light was poor for most of the time I was there but a few reasonable images were got (see latest images).

Portrush was quiet with no sign of the regular Ring billed Gull which winters here, so it was on to Portballintrae for a walk. The dune here had a few brave singing Skylark with a female Kestrel hovering alongside. There were more Turnstones on the rocks playing chicken with the waves as they crashed in.

Nearby there was a flock of Sanderling and Ringed Plover. Almost immediately amongst them I spotted a colour ringed bird. On closer inspection I realised I recognised this bird. I first photographed this bird in October 2007 first at wader roost site at Portrush and then subsequently a few weeks later in exactly the same place as this current sighting. I observed this bird again in 2008/09 at Portballintrae. Despite a few searches during the winter of 2009/10 I could not locate this bird, so it was a pleasant surprise to see it again this year. The bird was ringed on migration in Iceland and when I get more details I will put them up on the news page.

Before I left, though, there was the chance that this would be the last sighting of this bird. As I lay on the wet sand with the Sanderling all around me they all took off and started swirling around the bay. Looking up I noticed a Peregrine just as it went into a stoop towards the flock. Fortunately for the Sanderling they managed to avoid the falcon which was duly seen from the area by a flock of Herring Gulls.

This sighting will be sent to the colour ringing project leader Jeroen Reneerkens in the Netherlands. For more information on the project copy this link into you browser - http://www.waderstudygroup.org/res/project/sanderling.php