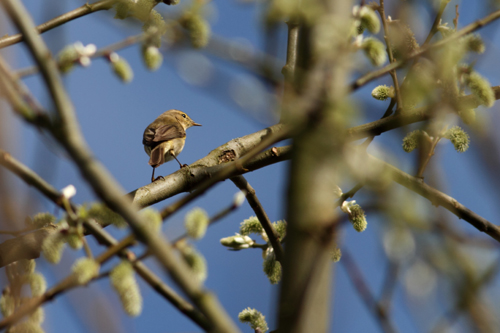 Chiff Chaff, Belfast
Chiff Chaff Arrival
A lunch time walk in Belfast’s Ormeau Park on Tuesday resulted in my first sighting of a summer migrant. From the top of a small copse of trees in the middle of the park came the unmistakable call of a Chiff Chaff.

Chiff Chaffs are normally on the first of our summer visitors to arrive and announce their arrival by calling their name repeatedly from the top of a tree. Most Irish breeding Chiffchaffs migrate to the Mediterranean and North West Africa for the winter, not as far south as some of the later arriving migrants. Chiff Chaffs are very similar to the Willow Warbler, which will be well on the way towards arriving, and can be told apart by the former having darker legs and shorter wings.

The Chiff Chaff population declined dramatically in the 1960’s and 70’s, thought to be due to harsher than normal conditions in their wintering grounds, but having shown some signs of recovery.

They feed mainly on insects and caterpillars normally in the canopy of trees making them hard to see (or photograph) well. They are also very active rarely remaining still except when singing.

On Thursday evening I seen several more migrants with a small number of Sand Martins in flight over the Sixmile River in Antrim Town.