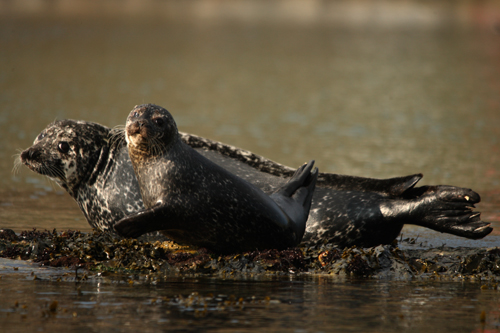 Harbour Seal, Rathlin Island
Delayed Boat Leads to Photo Opportunity
I was lucky enough to get over to Rathlin Island with work last week. Things didn't look good at 6am with heavy rain still falling but by 10am the day had stopped. It was going to be a busy day but I packed my camera - just in case.

The trip over was fun - the first time I've gone over on a RIB, but a bit fast for photographs. There were plenty of auks on the water as they are returning to their breeding grounds. As we entered Rathlin harbour there plenty of Eider and Seals about in the usual spots but there wasn’t time to watch them.

On the north side of the island there were plenty of Irish Hares about, again with many partially white ones. On the cliffs some of the Guillemots and Razorbills were taking up residence. Above several Buzzard and a Peregrine were seen flying over.

By the afternoon the cloud had dispersed and sun was out. Back at the harbour we were greeted with the news that the boat was delayed by half an hour. A chance to a few photographs whilst , finishing my lunch. The Harbour Seals were laid up on nearby rock so slowly approached them, keeping low against the rocks not getting too close so as to disturb them. I always love watching them, as they seem as inquisitive about me as I do about them, with a few swimming closer to shore get a better look.

There were a few Black Guillemots in the harbour with the Eider but never getting close enough to get a decent image – perhaps I should visit some my mainland colonies at the weekend. All too soon the ferry was pulling in to harbour and it was time for home.