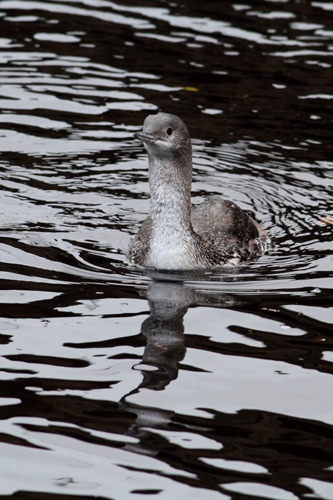 Red throated Diver, Ballycastle
Quiet Week
A bad cold and poor weather kept me indoors for much of last weekend. As predicted the week before the snow did, briefly return especially to upland Antrim.

I did get out for a lunchtime walk one day and was rewarded with a winter plumaged Red throated Diver on the river in Ballycastle. This stretch has produced quite a few rare birds in recent years with a Red necked Grebe, several Goosanders, Mediterranean Gull and the Laughing Gull also seen with more common species such as Dippers and Kingfisher. Back in the 80’s or 90’s an American Wigeon was also seen on the river here.

It goes to show any coastal area if regularly watched can produce something a little different from time to time.

This Red throated Diver is likely to have been one of two which I have seen regularly around Ballycastle Bay and sometimes in the harbour throughout the winter. It is unusal to see one on the river, especially as it travelled well upstream.