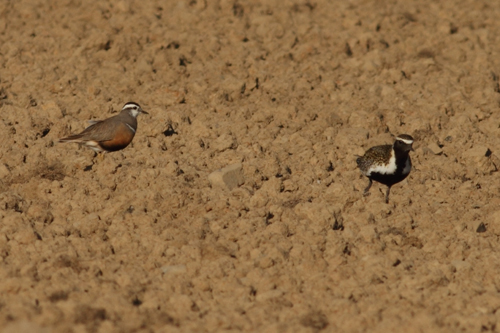 One of Four Dotterel with Golden Plover at Ballyquintin
Colourful Waders
On May Day Monday I was travelling to County Down to a motorcycle event. I could not resist a slight detour early in the morning to Ballyquintin on the southern most of the Ards Peninsula. For the previous few days a small flock, or trip, of Dotterel had been present.

Thankfully there were four birds present, and they looked stunning in the early morning sun. Unfortunately time was against me so could wait for the birds to get close enough for better photos, but I was happy to get a few record shots. The birds were quite flighty often being seen with Golden Plover.

These colourful waders are a scarce summer visitor to mountain areas in Scotland, mainly the Cairngorms and Grampian ranges. These are an unusual member of the plover nesting in arctic tundra but also on suitable plateaus on mountain ranges and wintering in northern Africa though to Iran.

There is a bit of a role reversal with this species, with the female brighter coloured than the male and it is the male which responsible for incubation and nurturing of the chicks (as it should be my wife would probably say!).

I had a special reason for seeing, or actually hearing these birds. Whilst out photographing the badgers recently I heard a couple of birds flying over which I was almost certain were Dotterel. I was lucky enough to hear the Ballyquintin birds and I am happy that the birds I heard were Dotterel - if only I had had the time to walk to the top of Knocklyade next day, perhaps they were waiting up there.