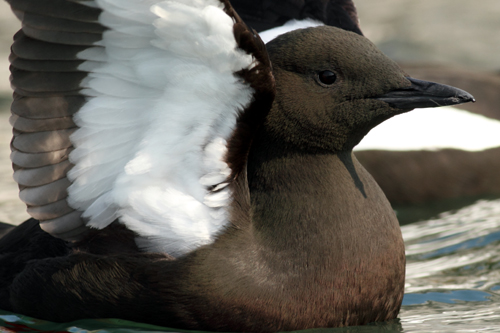 Black Guillemot. North Antrim
Black Magic - Very tystie
For me spring would not be spring without a visit to one of my local Black Guillemot colonies, and over Easter I managed to visit one. Breeding activity is well under way with most of the nest holes occupied and usual displays and fights breaking out.

This is a species of Arctic waters, with the British Isles being at the southern limit of it's breeding range in Europe. It breeds on both side of the Atlantic, being found on the eastern seaboard of North America as far south as Maine, as well as Alaska. Locally populations appear to be doing well but it will be interesting to see how it responds to any possible global warming, given that we are on the extreme edge of it's range.

These are very much a favourite of mine and there are more photographs in the Black Guillemot folder, found under the Gallery then My Favourites tabs above.