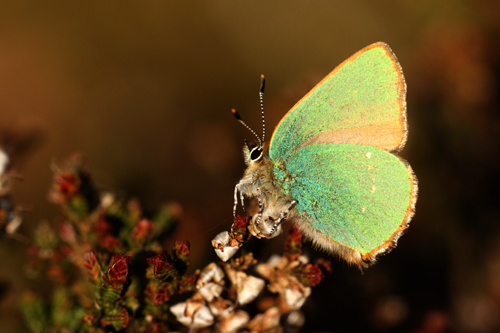 Green Hairstreak, Ballycastle
Diminutive Jewels
North Antrim in spring is nothing if not green. Fresh growth of grass after the winter and the new leaves on the trees bring out the proverbial forty shades of greens in the lowlands. For me though there is one green which stands outs from all others this time of year – that of the Green Hairstreak.

I have found a few sites for this species around the North Antrim since moving up here, but this year I have seen more than ever. One mixed forestry and moorland site near Ballycastle easily had one hundred individuals on the wing one recent weekend. As one of my favourite butterflies I couldn’t resist going and photographing them, in spite of the windy conditions.

This small butterfly (wingspan 27-34mm) always rests with it’s wings closed, displaying the green colouration of the under-wing. On fresh examples a faint line of white spots is visible on the under-wing. This colouration gives the butterfly the appearance of a fresh leaf. The upper-wing in contrast is brown, which may result it being overlooked when in flight.

It is a widespread species in Ireland with Bilberry (Vaccinium myrtillus) and Gorse (Ulex europeaus) are the main food plants.