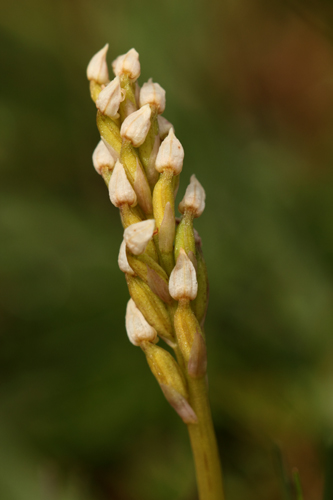 Dense Flowered Orchid, Fermanagh
First New Orchid of 2011 – Only Just
I visited a couple of sites in Co Fermanagh recently in the search of some new species to photograph. Top of my list was the very rare Dense Flowered Orchid Neotinea maculata. This species is more usually seen in the Mediterranean region of Europe has a small outlying population in the West of Ireland. For this reason it is sometimes referred to as the Irish Orchid. Most of this population is in the Burren in County Clare, but it can also be seen in Northern Ireland. Here it is known from only two sites in Fermanagh, both on limestone hills, though there has been a recent report of one along the Antrim Coast. In most years only 30 to 40 individuals of this species are seen in Northern Ireland making it very rare, though in some years more than 100 can be seen.

I have looked for the Antrim example a number of times recently without success so I had no choice but travel to Fermanagh. Apparently the best time to see it is in the latter half of May, but given the warm and sunny April I thought I should go a little earlier this year.

Having got the permission of the land owner I accessed the hill top site in rain and strong winds., but after a bit of searching of the right are I found one, then another and another. In the end 27 were seen. Unfortunately all had gone past their best in terms of flowering for this year, but it was still a pleasure to see this diminutive species. I will definitely return next year and hopefully see it in full flower.

Thankfully the rain stopped and light improved so I managed to get a few images of the spikes showing the flower head and reason why it has the name Dense Flowered Orchid. More images included in latest images and Orchids galleries.

Finally a thank you to all those who helped me locate this species and the landowner for allowing me access to the site.