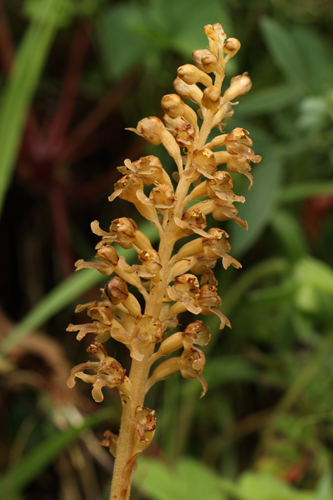 Birds Nest Orchid
Birds Nest Orchid
After a tip off about the location of another orchid species I had still to photograph I went for an evening trip after work to Banagher Glen wood near, Dungiven. Banagher is a wonderful place and well worth a visit. It contains some of the oldest oak woodlands in Northern Ireland and has a wide array of flora and fauna.

This orchid is different from the others we have in Ireland because unlike most other flowering plants the Bird's-nest Orchid does not have green leaves to collect its energy from sunlight. It is 'saprophytic', meaning it gets all its energy from dead vegetation, with the help of a mycorrhizal fungus which can digest the vegetation and passes some of the nutrients to the Orchid. Some believe the Orchid then manufactures chemicals of benefit to the fungus resulting in a symbiotic partnership.

Not requiring photosynthesis to exist means this plant can grow in the near darkness at the base of beach trees. Though this specimen was relatively out in the open, making photography a little easier despite the wind and showers. It gets its name from the matted rots which apparently can look like an underground birds nest. Flowering spikes do not come up every year which can make them a difficult species to find even where they have been seen before. Cross-pollination is carried out by insects, but self-pollination also takes place.