Wet and Windy May 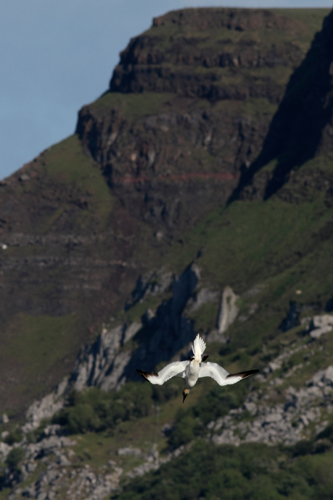 Gannet Dives with the Antrim Coast backdrop
Not much to report
If April was one of the warmest and sunniest on record then this May must be one of the windiest ever. Poor weather and on-going car issues have caused lots of problems and a couple of trips had to be postponed.

I had hoped to have added another rare orchid to the list this week, but I will have to hope they stay out until next weekend.

Frog Orchids have been out in good numbers at White Park Bay a lot earlier than usual. Those orchids which are coming into flower are getting damaged by the wind before they have chance to be enjoyed or photographed.

Last weekend I did get to visit the east Antrim coast and at a woodland site near Glenarm there were more than 25 Birds Nest Orchids out - like buses you wait to see one then dozens come along at once.

The highlight though was watching Gannets and Sandwich Terns feeding at Waterfoot beach. Hopefully they were having more success than the fishermen having a competition on the beach.

Anyway I have been putting my lack of mobility to good(?) use by starting a Flickr website to complement this one. So far I have put on Orchid, Butterfly and Mammal galleries. This site can accessed from the links page above or at http://www.flickr.com/photos/63223331@N05/