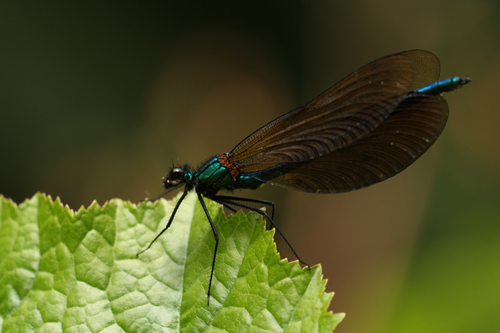 The poor weather in May risked delaying their emergence this year and in spite of a couple of visits to a known Wexford site close to where I staying I could not find them.

I could resist one last try. On the way home I suggested a family walk to the waterfalls at Eden Vale, though my wife got suspicious when I put on my walking boots. It’s a nice walk with plenty of wildlife, and quite unlike the other parts of Wexford I normally visit. Whilst I left my wife and son through sticks into the river I sneaked off into the undergrowth.

First I found a female and got some reasonable shots before it flew deeper into the tall vegetation. There was nothing else for it would have to follow. Sure enough I could see at least two males close to where she landed. The recent rains had made the area very marshy so despite my best efforts I couldn’t get close enough without sinking. I had to give up and wash my legs in the river before returning to car (with my wife shaking her head all the while).

I travelled north, a little dejected, but at least I’d seen them and got some sort of photograph. To make up for earlier behaviour I thought I’d better stop off somewhere nice on the way home. So Mount Usher gardens in Wicklow for coffee and a walk seemed reasonable. A stunning place and well worth a visit, especially when there are both male and female Beautiful Demoiselles right alongside the paths!