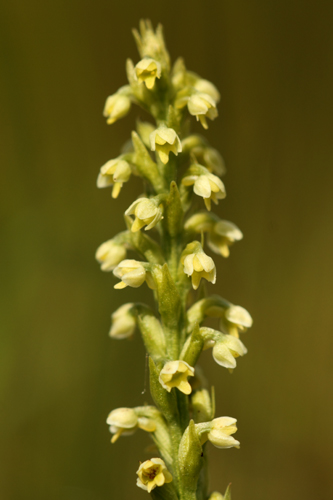 Last year and this have spent many hours at White Park Bay looking for this species without success. I then had hoped to visit a site in Fermanagh several weeks ago but this had to be cancelled due to car problems and the weather.

Just as I was giving up for this year I got word of some flowers at a site in south County L/derry. My luck was in as I was working in that area so a quick lunchtime stop produced 8 of these lovely little Orchids.

Also known as the White Mountain Orchid this species has declined greatly in Northern Ireland due habitat destruction, agricultural improvements of lands and over grazing. In Northern Ireland it is a Biodiversity Priority Species due to threat of losing this species, already it has gone from County Down.

2011 seems to be a good year for flowering though so hopefully there will be good seed production from the sweetly smelling flowers. After seed germination, the young plants must however form an association with a special fungus (mycorrhiza) in order to grow and develop.