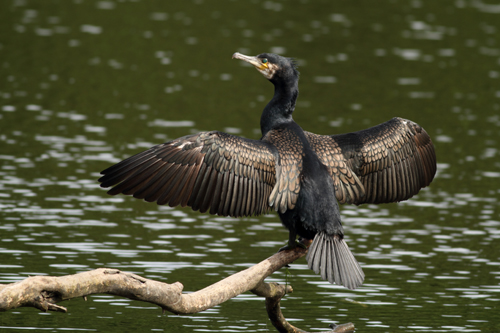 Cormorant, Quoile, Co Down
Caught in the Rain - Again!
Last Saturday saw me travelling to Downpatrick to cover a motorcycling event, and as usual I made a little time for wildlife photography. Well I might as well make the most of travelling down there.

The first stop was at the Quoile River, a site which often has otters, so I'm told, though I never seem to find them. When I arrived, there was a heavy rain shower so I waited for ten minutes until it passed. Almost immediately the sun came out and produced some lovely light.

Perfect for capturing a Cormorant drying it's wings on a branch in the middle of the river. It was amazing to see the copper colours on the wing feathers in the morning sun. The bird stayed reasonably close by for about twenty minutes before returning to the water to feed.

With the threat of another shower (all too common this summer) I decided to travel to Killard Nature Reserve to look for orchids. I left the car with the sun out and temperature starting to rise. I happily wandered amongst the dunes finding some late flowers of Early Marsh Orchid and many Common Twayblade, and almost accidently standing on a newly hatched family of Skylark. I quickly made a retreat and watched the parent bird return to it's brood.

Then the first drops of rain fell, then more and then one of the most intense rain showers I have experienced. Too far from the car to make a run for it, there was nothing for it but pack the camera away and stand it out. I got soaked, though thankfully the camera didn't!

As the rain eased I made my way back finding a single Bee Orchid plant in flower. The weather improved all the while. So back to the car and on to the bikes, where I took an example from the Cormorant and stood in the sun until I was dry.