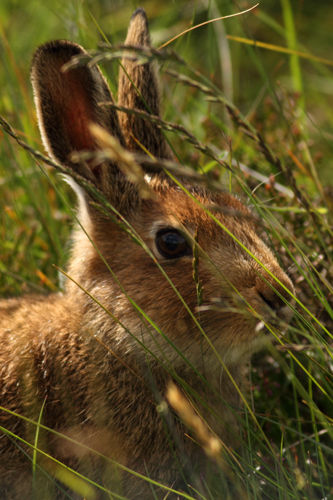 Young Irish Hare, Antrim Hills
When the living is easy
Sometimes the weather forecasters get it right and sometimes the wildlife behaves itself, but rarely do the two things coincide.

Last Tuesday a rarity was predicted – a sunny and reasonably calm day. So I booked a day offwork and went out with my camera at about 5am. First stop a nearby oakwood to look for Wood Warblers. Sure enough there was one calling, though too high up for photographs.

Then it was down towards the east Antrim Coast road, with a quick stop at Cregagh Wood near Cushendun for Red Squirrels – three of them running round with Jays for company. Thankfully the squirrels should no sign of pox which if affecting a nearby population. On the coast the Irish Sea was flat calm, so I kept an eye out for the dolphins I had seen there a few months ago. No dolphins but a very obliging Oystercatcher which posed in the sun for photographs. It is not often they let you get close.

A stop at Carnlough and Glenarm harbours allowed a chance to view and photograph the Black Guillemots (again – I just never tire of them). I then decided to go inland into the hills where I was rewarded with wonderful views of a young Irish Hare, Grasshopper Warblers and Whinchats (more on this species later) as well more common species.

Orangetip, Green Veined White and Small Heath butterflies were on the wing, doing as I and making the most of the weather.

Finally it was a trip north through the Antrim hills with a flock of 15 or so Crossbills and two Redpoll at Slieveanorra, to Kinbane Head on the north coast. Here is rewarded with good views of a male Whitethroat, singing and catching flies, whilst a Raven patrolled the cliffs.

All in all a memorable days and plenty of images to keep reminding me in the future of how sometimes, just sometimes everything comes together.