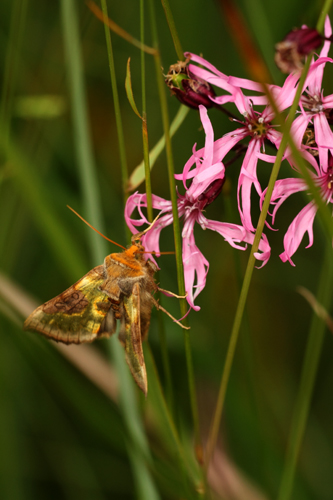 Burnished Brass Moth, Montiaghs Moss
South Antrim trip
Father’s Day seen me let loose for the day. Unfortunately North Antrim was grey and wet so I set off south and inland. I could see clearer and brighter sky ahead so I kept going until I caught up with them, south of Antrim town.

The decision was quickly taken to go to Montiagh’s Moss close to Aghalee. This is wonderful cut over bog area to the east of Lough Neagh. It is home to some great birds, flowers, butterflies and dragonflies. There was one species though that I hoped to catch up with – the Crescent Bluet (the what!). This is the current name for what I prefer to call the Irish Damselfly. It took much searching through the much more common Variable and Azure Blue Damselflies but eventually I found one, and luckily the sun came out from behind a cloud just as I did (see the latest images gallery).

Other highlights included Four Spotted Chasers, Bog Asphodel and lots of Ragged Robin including one clump with a new moth for me feeding. In fact I wasn’t sure what it was at the time but I was able to identify it as a Burnished Brass from the photographs when I got home. There were lots of Meadow Browns, Ringlets and a single Small Tortoiseshell in the fields as well, though no sign of any Marsh Fritillary.

With the threat of a heavy rain shower I retreated to the car and decided to travel to Stoneyford Reservoir above Lisburn. Here I treated to 40+ Swift feeding low over the shores of the reservoir. Unfortunately the light was poor but I managed to get a few reasonable record shots. One shows the full throat pouch of a bird catching and storing food for its young. This photograph can be seen on my Flickr site at http://www.flickr.com/photos/63223331@N05/5870500310/in/photostream

So not a bad few hours.