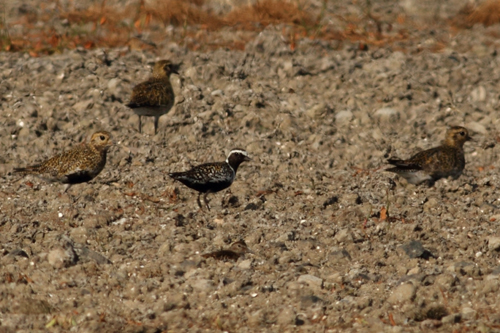 There has been the Great Grey Shrike at Slievenacloy, a Purple Heron near Lisburn, both Pallid and Montagu's Harriers in Antrim, a Bee-eater and a possible Marsh Warbler in Co Down and a Great White Egret, Avocets in Londonderry. Add to this a supporting cast of Wood Warblers, Ring billed Gull and others it has been quite a year so far.

The birds of the moment though are to be seen at Myroe, Lough Foyle. Present for a couple of weeks have been two (yes two!) Pacific Golden Plover. Never seen before in Northern Ireland these stunning birds from Asia and Alaska can be seen with a flock of Golden Plover. Also present are a range of other waders including a Semipalmated Sandpiper from North America and a Curlew Sandpiper in summer plumage.

Birds from Alaska have been found to complete a migration of more than 3000 miles in a single step for about 50 to 80 hours to wintering grounds in Hawaii. It is thought they fly at an altitude of 6km, in a V formation to cut wind drag otherwise they would simply fall into the sea, short of their destination. Other birds appear to follow the coast to California, Chile and Galapagos Islands.

Birds nest in northeast Siberia migrate as far south as Australia and New Zealand for the "winter", though birds also winter in north eastern Africa and the Middle East.

Birds are site faithful returning, often in family groups to the same breeding and wintering locations year after year, so they may return to Myroe next year. Who knows they may have been there last year undetected.