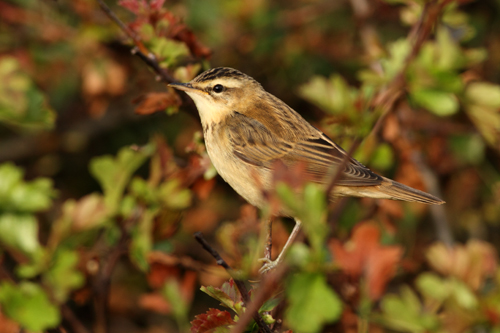 Sedge Warbler in the Evening Sun
Finally Some Decent Weather
After a wonderful April the weather in North Antrim went downhill in May and June. Thankfully as the July holidays approached things began to improve. The sun came out and the temperatures rose. With a little free time there was a chance for some photography.

Early mornings and late evenings are the time to be out with the camera this time of year when the light is warmer and less harsh. Insects are generally less active at this time so it possible to get up close.

A recent evening trip along the North Antrim coast produced a night to remember. As the Common Blues and Dark Green Fritillary butterflies settled in for the evening flock of Sand Martins endlessly sped low over the river hunting insects. Nearby a Grasshopper Warbler reeled whilst a family of Sedge Warblers made their way through the tall grasses, rarely being seen.

Another new family, this time Willow Warblers sat concealed in a hawthorn bush with the adult birds briefly being seen bringing in food.

Offshore a small pod of Harbour Porpoise could be seen from time to time moving towards the mouth of the river, probably chasing Salmon or Sea Trout as they waited to head back up stream.

A lone Common Spotted Orchid had set up home on the edge of a nearby cliff overlooking the bay, with a view of the north Antrim coast humans would millions for. All this as the sun slowly began to lower in the sky, developing the dunes in a warm glow.

More of these recent images will be appearing on my Flickr photostream in the coming days. (see links page)