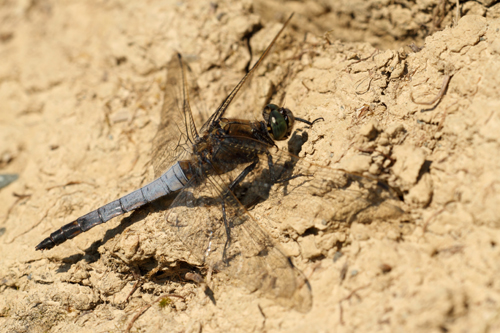 Male Black-tailed Skimmer, Co Louth
Rare Dragons
Common Darter well and truly photographed it was time to search for my main target for the day, the Black tailed Skimmer. This is a species never reported from Northern Ireland but again lives just across the border – it’s bound to be up here somewhere, sooner or later!

Normally only found in the calcareous lakes of mid and west Ireland it has spread east and has now colonised this former quarry in County Louth. It is a very active and strong flying species often seen flying low over the water, skimming the surface, hence the name.

Whilst I found one quite quickly it took a little while to find one which would settle for a photograph. Eventually one settled on a mud bank to bask in the sun and I was able to approach quite close for a few decent shots.

As the morning went on more and more Skimmers appeared settling on the rocks close to the ponds edge, but rarely allowing close approach. By waiting by a favoured perch though it was possible to get the dragonflies to come a land reasonably close. By lunch it was possible to find copulating pairs flying around the site giving an opportunity to see males and females together. When the pair separated and the female went to lay her eggs in the shallow water the male wound hover close by allowing an opportunity for in flight photography of this species.

This wasn’t however the species I wanted to get in flight, this was another speciality of this wonderful Odonata site.