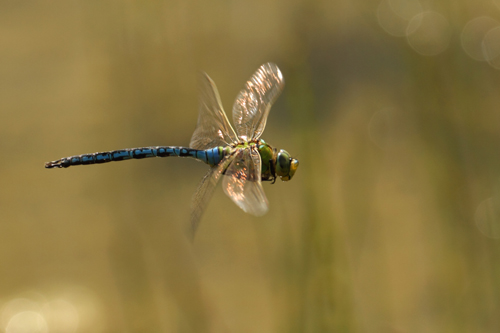 Male Blue Emperor, Co Louth
Big Dragons
So far so good. Common Darter, Blacktailed Skimmer and a few Blue Damselflies seen and photographed. Next on my list was to get a photograph I've always wanted to get - Ireland's largest Dragonfly the Blue Emperor in flight.

The first confirmed record for this species in Ireland was 2000 in the far south east. From this base it has spread quickly north and has been seen once in the far south of Northern Ireland (well until recently! - more later)

This is a stunning beast. The male has an apple green thorax and a stunning blue abdomen, reminiscent of a Kingfisher. By this stage in the day I had noticed a couple of males and a female over the pond and how I’d gotten shot of Black tailed Skimmer I could try for something different.

Unfortunately though the morning light was from the wrong direction, but did the best I could wading a little way into the water at the edge of a small bay. The Emperor tirelessly worked back and forth across the bay occasionally picking off smaller insects and eating them in flight. Occasionally it would stop and hover giving me a chance for a photograph or two before it sped off again. Time after time I tried to predict its flight path and pre focus, but rarely did I get it right. But occasionally I did and that’s what keeps you going

Finally I had to stop, I was hungry and arms were starting to hurt. Holding up heavy camera equipment in readiness for a shot from early morning was taking its toll. A quick review of images that maybe I’d got one or two decent shots, but I’d have to wait to get home to be sure.

We started back towards the car, but lunch would have to wait a little longer!