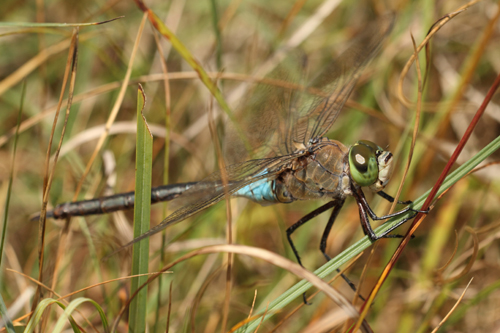 Lesser Emperor, Co Louth
Surpise Dragon
Happy and satisfied with a great mornings photography we set off back towards the car in search of some other wildlife sites and more importantly food and water.

On the way though I noticed another large dragonfly zoom past me. As soon as I caught a glimpse I was intrigued, it was a little smaller than the Emperors , darker but I could clearly see a bright blue band across the middle. Could it be? There is another large species of dragonfly which had never been lucky enough to see never mind photograph – Lesser Emperor or Yellow-ringed Emperor.

I tracked it as it quickly flew over the vegetation towards to pond. It circled a few times fly back towards me a settled in the vegetation. Heart racing, I slowly approached closer and closer. By now I was certain of the identity – my first Lesser Emperor, but I wanted a photograph. I managed to get within a metre or so as it sat on the grasses. The insect took off and flew around the shore line for a few minute before lifting up and disappearing into the taller vegetation, but not before I managed to get a flight shot. I didn’t see it again.

Amazingly just like the Blue Emperor this species was not recorded in Ireland before 2000, though it has failed to take hold here. Breeding has been suspected but it has never become as common as it’s larger cousin even in the southeast. It was however recorded at Craigavon lakes in Co Armagh some years ago. Apparently there have only been two records this year in Ireland so far so I feel very privileged to have seen this one.

This was the perfect conclusion to the morning in Louth. The sun was still out and I had several more hours of photography ahead.