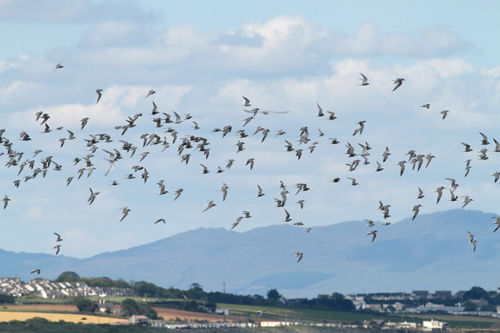 Terns, Baltray, Co Louth
Enough of the Dragons
By now it was warm, the car thermometer had risen to the mid-twenties. We had been working in the full sun for about four hours solid. The decision was easy head to the coast for a cool breeze and some birds.

We went south to Baltray and wonderful beach which plays host to a colony of Little Terns, a species which no longer breeds in Northern Ireland. It was only a twenty minute drive along a wonderful coastline, though it nearly took as long to negotiate the potholes of the track in. Not good of the back or car suspension (glad it wasn’t my car!)

A ten minute walk across the dunes and we were on the beach having seen a few Dark Green Fritillary butterflies on the way. As we approached the tern colony protected by plastic fencing and voluntary warden wall seen very quiet. A quick word with the warden confirmed or fears that the early nesting birds had fledged whilst the weather had gotten the better of most of the later nests. Disappointed I suggested another approach, we would walk down to tideline where I could see a mass of terns and waders being disturbed occasionally by walkers and runners.

As we slowly approached the numbers of birds became apparent, hundreds of terns were present of at least species. Recently fledged Little Terns were being fed, Common and Arctic Terns sat side by side on the sand, whilst the larger Sandwich terns stood out in the crowd. Closer inspection revealed a few Roseate Terns in the flock. Every so often a walker or large gull would send the flock reeling into the sky with the backdrop of the Cooley and Mourne Mountains behind.

Along the waters-edge busily fed Sanderling and Dunlin, some moulting from breeding plumage just to add to the spectacle.

A great way to spend the afternoon with terns flying to their feeding ground low over my head.