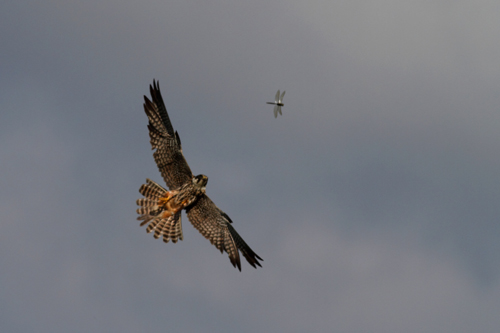 Hobby, this time catching a Common Hawker
One Site, Two Rarities - but for how long?
A few weeks ago I travelled to Co Louth and successfully photographed a Blue Emperor dragonfly in flight. Spurred on by this success I decided to try again, this time for Brown or my preferred name Amber winged Hawker. Thankfully this species doesn’t require such a long drive and I managed to combine this attempt with a motorcycle event in County Armagh. Luckily, in spite of poor light, I managed to get some reasonably good flight shots. These can be seen on my Flickr Photostream.

With the images I wanted in the camera I decided head home via Montiagh’s Moss near Aghalee, County Antrim. This is a wonderful cut over bog with specially created dragonfly pools and is excellent for a wide range of species. Whilst looking for some darters or chasers to photograph the sun came out and almost immediately the much larger Hawkers appeared. First more Amber winged Hawkers then a couple of Common (Moorland) Hawkers. Whilst watching them hunting I became aware of a larger dragonfly, with a green thorax and blue abdomen – it could only be a male Blue Emperor. This is only the second record of this species in Northern Ireland and the first in County Antrim, I was to say the least delighted. I spent about 20 minutes trying to get record shots of it in flight as it would not land somewhere accessible. Throughout this time I watched it catch smaller insects including at least one damselfly. This is definitely one of my highlights of 2011.

Unbeknown to me there was another rarity lurking on the bog, a predator. A predator which likes to eat Emperor Dragonflies! In the days before my visit a bird of prey had been spotted nearby but it’s identity hadn’t been confirmed so news had not got out. A few days later an experienced birder spotted to raptor and confirmed it as a female Hobby, a rare visitor to Ireland.

It was the following Sunday before I made back to Montiagh’s but thankfully the bird was still present and allowing superb views both sitting on fence posts and displaying It’s aerial hunting prowess, despite a serious injury to it’s right leg. Whilst watching this bird I could not help but think about my Emperor and after an extensive search of the area on this and subsequent days it couldn’t be found. Did it just move on or did the master aerial predator itself become the prey?