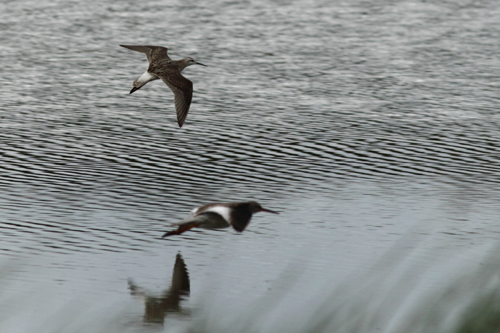 Wilsons Phalarope in flight, Belfast
More NI Rare Birds
It continues to be a great year for rare birds in Northern Ireland.

Hot on the heels of the Hobby at Montiaghs Moss was the discovery of a Wilson’s Phalarope at the RSPB Reserve in the Belfast Harbour Estate. I have managed to get down on one occasion to see this wonderful little wader, though I only managed to get record shots of it as you can see.

Wilson’s Phalarope is a North American species which breeds in the prairies of western Canada and United States. It migrates around this time of year to spend the winter in the central Andes area of south America – so Belfast is a long way off course. Wilsons Phalarope have a straight fine black bill and will often be seen in shallow saline waterays. This individual appears to prefer the company of a Redshank to feed alongside.

As with other Phalarope species the females are larger and more brightly coloured than males and it is the females that pursue males, compete for nesting territory. They will defend their nests and chosen mates until the eggs are laid. Once the laying is complete to females begin their southward migration, leaving the males to incubate the eggs and rear the young.

Meantime the American Ring-billed Gull has return (if it ever left) to the harbour area of Ballycastle, though it not always easy to find and seems to spend some of its time elsewhere (hopefully working off the amount of chips it is eating!)