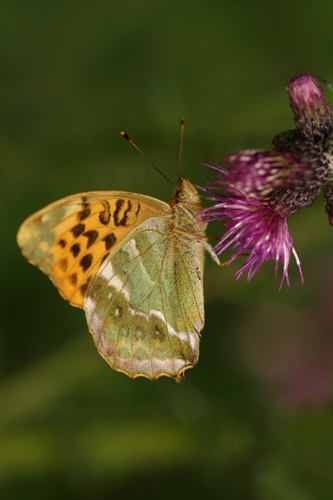 Silver washed Fritillary, Co Fermanagh
In Search of Butterflies
One of the photographic challenges I set myself a few years ago was to photograph one of Northern Ireland’s rarest butterflies the Purple Hairstreak. And at the start of this year this challenge remained unfulfilled.

I therefore decided to make a big effort this year to learn more about the species, try and at least see it, watch it’s habits and hopefully get an image or two.

The oakwoods of Fermanagh are the primary haunt of this species in Northern Ireland, particularly those around Crom Estate. There was the first problem, this is the extreme opposite corner of the Northern Ireland.

The next problem is that they spend almost all there time high up in the woodland canopy, only rarely coming to lower levels. They are most active in the late afternoon on warm still days, another problem given this summer’s weather. So with odds stacked against me I thought I should still try, and as you can guess by the fact that the photograph alongside isn’t a Purple Hairstreak I still haven’t got a photograph.

A few trips to Fermanagh though has resulted in brief views of the hairstreaks high the trees and more recently I have watched them at Ness Wood, Co Londonderry, the first place I ever saw one. So I know where to look next year and I will be trying a few tricks to see if it possible to attract them down from their lofty homes.

In the meantime the trips haven’t been a waste. The woods and surrounding areas in Fermanagh are fabulous places to visit and in them I have seen more Silver-washed Fritillary this summer than ever before. This is a large, brightly coloured and fast flying species which can sometimes allow very close approach.

The flight period of this species in Northern Ireland is Mid-July to mid-September so there is still time to see one. Glenarm Woods in Antrim, Crom Estate in Fermanagh and Slieve Gullion in south Armagh are a few of the sites where they can be seen. The food plant of the caterpillar is Bramble and Common Violet.

There is a photograph of the upperwing in the Latest Images Gallery.