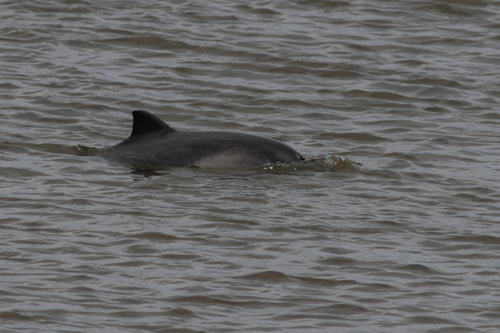 Harbour Porpoise, Barmouth
Sit back and enjoy the show!
A day off work, the sun is out and temperatures are almost like summer. What better than a trip to sea? Well practically in the sea actually. The River Bann enter the Atlantic between the towns of Portstewart and Castlerock with wonderful beaches either side. The mouth of the river itself, called the Barmouth, is guided out into the sea by long concrete piers on either side. These breakwaters were first constructed in 1879 and have been re-enforced several times since and they make a wonderful platform to view the marine wildlife of the area.

The sea was calm for a change this summer and as soon as I arrived I was watching three Harbour Porpoise just offshore. Over the next hour Porpoise numbers had risen to ten with two young calves. It was wonderful to watch them as surfaced sometimes five at a time in unison. Occasionally they would break off their hunt for fish to “play”, rising higher in the water and moving faster than usual and tail slapping.

All this activity attracted the attention of two Bottle nosed Dolphin which paid a brief visit. As soon as they arrived the Porpoise activity ceased, and for several minutes you wouldn’t have known they were there. As soon as the dolphins moved on the porpoise reappeared and resumed their hunt for fish. There have been several confirmed reports of Porpoise, especially young one, being killed by dolphins, so there evasive action was not without cause.

All the while a Grey Seal kept a watchful eye on me just off the end of the pier, whilst Sandwich Terns now losing their black caps of their breeding plumage dived head first in search of small fish. Turnstone, newly in from further north wandered around my feet in search of invertebrates.

I was happy! What a wonderful experience this couldn’t be improved upon could it? Well it could! Only 30m or so off the pier a Basking Shark’s dorsal and tail fins cut through the sea. Only the fin tips were visible, but the gap between suggested this was a big beast.

Finally before I had to leave the Sandwich Terns fishing was rudely interrupted by several attacks by a dark phase Arctic Skua, trying to steal their catch. A magical couple of hours of just sitting with camera watching and photographing a special natural history display.