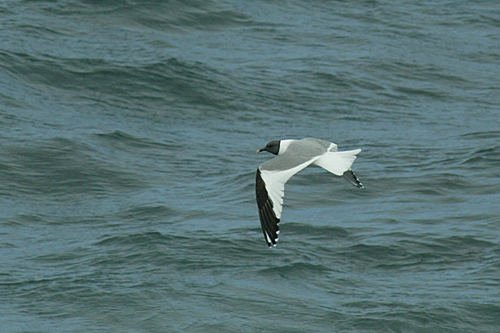 Adult Sabines Gull
Wind, Rain and Seabirds
A forecast of gales is normally a bad thing, but when you want to look for seabirds there is nothing better. Last week such a forecast attracted me to the far west of Donegal on a headland near Glencolumbcille. Setting out early in the morning I was on site with a fellow birder at not long after 9am.

We had a quick check for possible migrants since the conditions were not too bad and sun was coming out intermittently, unfortunately nothing was showing itself if it was there.

I could not resist the draw of the windy cliff tops any longer, so after a quick check for an area to sit with a little shelter the telescopes were set up. we were straight away rewarded with three Sabine’s Gulls all together. These are a beautiful gull from the Arctic - Greenland, Spitsbergen, N Russia & N North America. They winter in tropical regions of the Atlantic and Pacific and are normally only seen here on migration when winds force them close enough to shore to be identified. In total five were seen passing, usually in the company of Arctic Terns.

Quickly a few Sooty Shearwaters were seen moving south, followed by more and more. Over the next two and a half hours at least 180 passed. Slightly more Manx Shearwaters passed, normally a little closer to shore. Amongst the steady passage of Fulmar I was able to pick out a Blue Fulmar, a darker variety which breeds in far north or Iceland and Greenland.

An impressive haul of 50 Great Skuas (or Bonxies) were seen with smaller numbers of Arctic and Pomarine Skuas. One Grey Phalarope was seen. These tiny birds are a wader that wants to be a seabird. They nest in Arctic but migrate over the ocean south to spend the winter at sea.

After lunch and with the rain setting in we moved a little further east to St Johns Point which is a long peninsula which extends out into Donegal Bay. Here there were greater number of Manx Shearwaters and over about an hour at least 10 Storm Petrels were seen. These seabirds are about the size of a House Martin living in worst conditions the ocean can through at them living on plankton.

These conditions are tough, but enjoyable for birders who like seawatching even if it is only for a few hours, but to think of what the these tough little birds have to endure day after day is incredible.