Comings and Goings on the North Coast 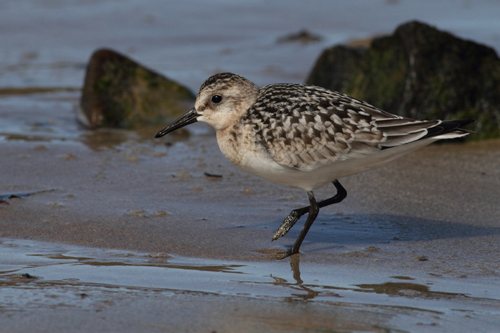 Newly arrived Sanderling in North Antrom
Times are a changin
As summer, if you can call it that, draws to a close it is time of change along the North Antrim coast. Already skeins of Brent Geese are regularly passing Ballycastle on their way to Strangford Lough and then beyond. Since I moved to the North Coast this sight has always left me with mixed emotions.

Many of summer migrants have left or are preparing to leave, the Swifts have gone for some weeks now and already I miss their screams as they pass low over the Diamond in Ballycastle. Swallows and House Martins are lining the wires preening and flexing their wings in readiness for their long journey north. The warblers have fallen silent, most them having left and the final few stocking up on as many insects as they can to build up fat reserves.

At the same time though our autumn migrant and winter visitors are beginning to stream though. As well as the Brent I have watched a few parties of duck pass, including Wigeon and Common Scoter. The shorelines are becoming busier with influxes of Sanderling, Turnstone, Dunlin and other waders, though for now many seem to be only stopping off before moving on a few hours later.

As I described early this week the seabirds are moving, often unseen until the winds force them close enough to shore to be observed and identifed.

Small Tortoiseshells in the gardens, Black Darters and few hawkers in the bogs, represent the insect kingdom in North Antrim, for now. The brief appearances of the sun show it still has the strength to heat the land quickly and these creatures stir from their resting places, to add some additional colours to the landscape.

Mixed emotions yes, but still a time I love, every day brings change and movement, some fresh experience and challenge to capture as an image.