First Snows of the Winter 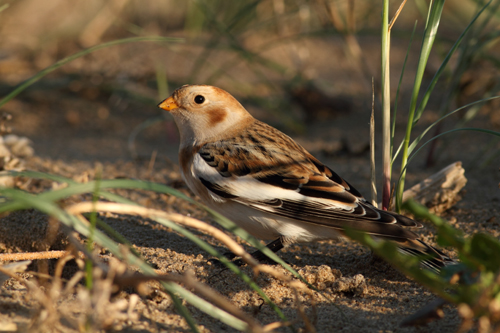 Snow Bunting, Lough Foyle
Weather and Buntings
Last Sunday the weather improved, the sun came out and so did my camera. I decided to travel to the other side of the River Bann to check along the north coast for wildlife.

My first stop early in the morning was Magilligan Point which sits at the northern most part of Lough Foyle. As soon as I arrived I found a large flock of Sanderling and Dunlin, with a few Ringed Plover for company. The sun was low in the sky, offering warm light on the birds, perfect for photography. Having crawled over the wet sand and got reasonably close I reckoned I had some nice shots of the roosting birds. (see latest images gallery)

I made my way back to the dunes to the car park but before I had left the beach I found a Snow Bunting. I slowly approached, carefully stalking it, getting really close. Actually too close, when I went to take a photograph I was actually inside the minimum focus distance of my lens. So I had to back up.

This obliging little stunner kept me company for nearly an hour, hopping around me often getting too close. Very enjoyable!

A quick visit to Myroe on Lough Foyle produced very little other than another Snow Bunting in flight and few Greenland race Wheatears hopping along the sea defence wall.

Three more Snow Buntings were at Castlerock beach, though not as tame as the earlier bird. Off the end of the Bann a Black Tern was feeding with the Sandwich Terns, all now in their winter plumage. A couple of Harbour Porpoise were seen offshore, but they didn't attempt to get into the river whilst I was present.

The final stop of the day, with cloud beginning to build was the East Strand car park in Portrush where the Ring-billed Gull has returned for another winter. Unfortunately it didn’t give any great views.

As if carried south by the Snow Buntings Northern Ireland experienced the first snow of the winter on the hills a few days later.