Not Quite All Quiet on the North Front 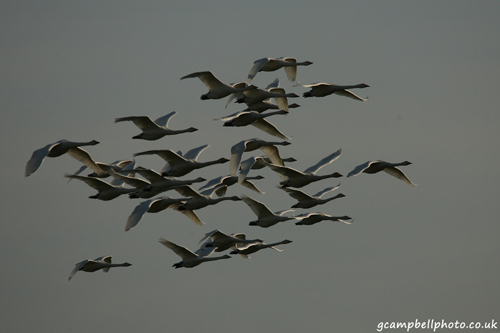 Whooper Swans on Migration
Noisy Migrants
Poor weather, work and other commitments have meant I haven't been out much with the camera recently. That doesn’t mean that there hasn't been any wildlife to report.

Even from my own garden I have been able to watch and listen to migration occurring and observations from Ballycastle harbour have allowed further migration wonders to be experienced.

Several flocks of Whooper Swans have made their way powerfully over Ballycastle town on their way to wintering grounds to the south. Brent Geese continue to work their way around the coast rather than travel over land, with the occasional birds stopping off on the shoreline for a break. Young birds which have never seen humans before can sometimes allow close approach.

Offshore several large diving duck flocks have been seen on migration.Scaup and Tufted Duck have both been seen in recent days, on their way to Lough Neagh.

Wheatears, many of the larger, brighter Greenland race, are still frequent along the rocky coastlines of North Antrim whilst winter visitors such as the beautiful Snow Bunting are appearing more regularly.

At night the movements don't relent. I have recently heard my first Redwings call out in the darkness as the travel high above my home. Over the coming weeks, if the winds turn more northerly as has been predicted, thousands of these birds, together with Fieldfares will stream through Northern Ireland.

I can only hope the Waxwings follow again this year to feast on the berries which adorn our hedgerows.