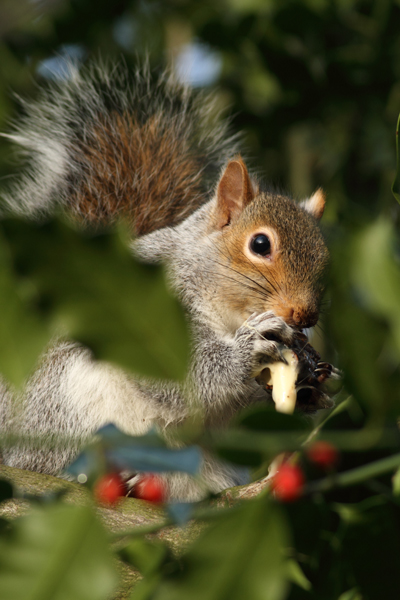 Grey Squirrel eating a Snail
Ununusal Meal?
A recent lunch time walk in Belfast didn’t appear to be throwing up anything unusual. Ormeau Park is only ten minutes away and is one my normal lunch hour walks. The park can host a wide range of wildlife. Over the past few years I have regularly seen Jay, Sparrowhawk, Long-tailed Tit, Treecreeper, Bullfinch and in winter Redwings.

One of the species I always see though is Grey Squirrel – there’s a thriving population. I don’t normally pay them much attention. On this occasion though whilst trying to get a shot of a Robin in a Holly bush – well Christmas is coming, I noticed a squirrel run up a nearby tree and sit on a branch. Nothing unusual there. Then came a loud crunching noise. On closer inspection it became clear that the squirrel was trying to break though the shell of a Snail.

After a lot of effort it managed to get access to the flesh inside, though I have to say the Squirrel did not appear to enjoy its hard gained meal and remains of the snail were promptly ejected from the tree unfinished.

I have read that squirrels when very hungry will eat invertebrates, but I have never heard of them tackling snails. If they are that hungry now, it could be a long hard winter for them.

I would be very interested to hear if you have witnessed Grey Squirrels eating snails before.