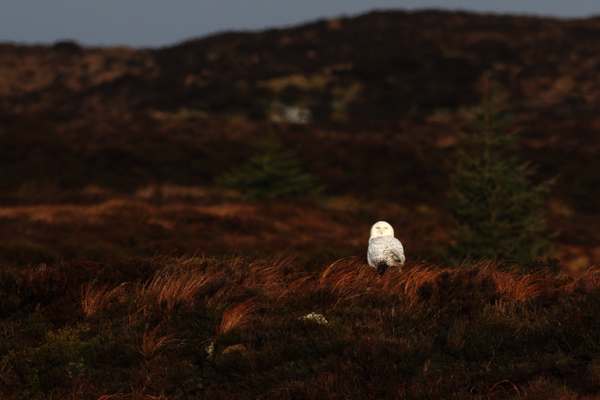 Snowy Owl, Altikeeragh NNR
Rare Owl graces Northern Ireland
Northern Ireland continues to turn up the goods in terms of rare birds. 2011 was a great year and 2012 has continued in a similar fashion. Already there has been the Ross’s Gull, Bonaparte’s Gull, Richard’s Pipit, a Thayer’s Gull and other rare or scarce gulls and geese. It is now the North Coast’s turn with a fantastic bird – a Snowy Owl.

It has been seven years since the last one in Northern Ireland, found not too far away from the current bird at Lough Foyle, though there have been birds in Donegal and Mayo since.

I believe a large white owl was reported to the RSPB as being near Castlerock last week but on Wednesday it was tracked down to Altikeeragh Nature Reserve, between Castlerock and Limavady. Despite negative reports on Thursday I thought I would have a look on Friday lunchtime since I was working nearby. Through the gloom on a distant hillside I spotted something white. With the binoculars I could make out the shape of what appeared to be a Snowy Owl, but given the distance I could only be sure once it moved.

As I was working I could only stay for about twenty minutes so there was no point trying to get any closer. On Saturday morning I arrived back at Altikeeragh and to my surprise only one other vehicle was present. The cloud was low and visibility poor, compared to the sunshine in the valley below. As I got ready another birder arrived and we walked onto the hill. We met the first birder on site leaving with negative news, but we thought we would try anyway.

After a little searching I made out something in the distance through the gloom. A quick check with a scope confirmed it was the Owl. We relocated ourselves a little closer and then made our way onto the bog flushing a couple of Red Grouse as we went. We slowly made our way across bog trying to stay on the higher ground where we could.

We managed to get reasonably close and I managed to get a few good record shots of this majestic bird, but not wanting to outstay our welcome we quickly backed off to leave the bird in peace.

Be warned the area is very wet and it is difficult terrain. Luckily we didn’t come across any very deep pools. So if any of you are planning to go up and see this bird be warned if you venture of the lanes it can very dangerous. I would advise staying on solid ground scan carefully and wait for the bird to appear.