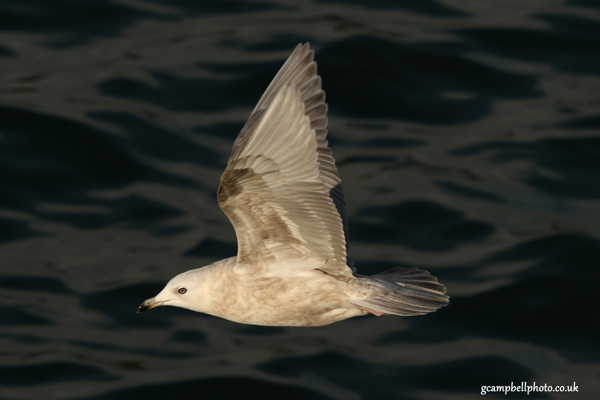 Kumlien's Gull, Ardglass, Co Down
A Big Pipit
This week I was lucky enough to be able to visit Killard Nature Reserve in County Down early one morning this week. I have discussed how great a spot this is before when visiting in summer for the vast array of orchids which can be found there.

Since just after Christmas, though the reserve has hosted a very rare Siberian guest, a Richard’s Pipit (Anthus richardii). This bird is larger than the more common Meadow and Rock Pipits we are more likely to encounter here in Northern Ireland. This size is reinforced by habit of having a more upright with a stretched neck stance, looking like a small Song Thrush.

I have tried to see this bird a few times now, walking over areas of shorter vegetation on the reserve in the hope of seeing, without success. This week promised to be the same I walked the area the bird had been seen before with only a brief adrenaline rush when I flushed a Skylark, but no Richard’s Pipit. I then searched other nearby suitable habitats right around the headland – still no luck. My work colleague would soon be joining me and I would have to leave, so I quickly walked up onto the higher part of the site to walk back towards the car.

As soon as on the top plateau in the taller grass I flushed out a Short eared Owl, which has also been reported on site in recent weeks. It flew towards the back of the site and since I was going that way I thought I would see if could get a bit closer. When briefly lived in this part of the world I would regularly see Short eared Owls up there, but since turning to digital photography I haven’t had a chance to photograph one of these great birds.

I slowly made my way in the direction the bird flew, right to the back of reserve were it meets more agricultural fields. Here there are several concrete and tarmac areas from a post war radar station for the nearby Bishopscourt RAF base. As I walked across the vegetation a bird sprung into the air from feet. Pipit shaped, large, a long tail with white outer tail feathers and pale belly it flew strongly away from giving a rasping, long “shreep” call. Unfortunately in dived off the side of the upper part of the reserve towards the area it is said the Richard’s Pipit normally favours. My first if all too brief view of a Richard’s Pipit.

I went for the binoculars rather than the camera on this occasion so unfortunately I have no photos to show you, but I do intend to return in the coming weeks if I get time and weather improves. I’m determined to get some shots of this excellent bird for Northern Ireland. You will have to make do with a shot of a scarce Kumlien’s Gull taken at nearby Ardglass.