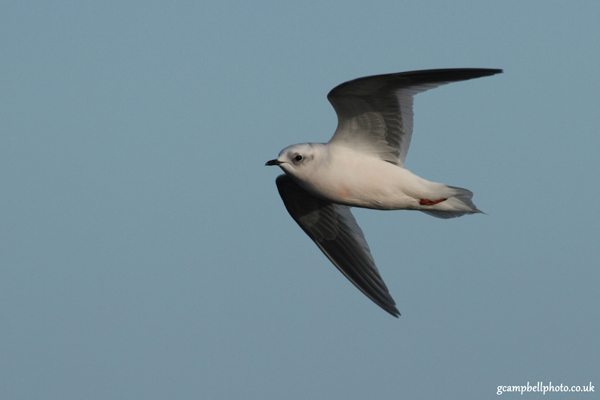 Adult Ross's Gull, Ardglass, Co Down
Star Bird of 2012?
Northern Ireland continues to host an impressive array of gulls. Iceland and Glaucous Gulls continue to seen around the country including on the Lagan close to Belfast city centre. The Bonaparte’s Gull which I photographed last weekend (see latest images) continues to seen between Ballygally and Larne on the east Antrim coast.

Many of the Iceland Gulls have relocated to Ardglass Harbour in County Down where double figures are being seen regularly. Among them are a few examples of a rarer bird called Kumlien’s Gull which may be picked out through careful observation, which shows slightly darker primary flight feathers, including one very dark individual.

The star bird though has to be a beautiful adult Ross’s Gull, surely the one of the most beautiful of all gulls. Found in the latter half of last week I managed to get down on Sunday to see it.

An all to brief appearance in the morning had me worried for a while, but from lunch time on it put in longer stays, almost always in flight only briefly alighting on the sea at the harbour entrance from time to time.

This wonderful bird put on a great show for birders and photographers from all over Ireland and beyond and is sure to remain a highlight of 2012 for many, including me!

Some day I hope to photograph these birds in their high Arctic breeding grounds with their black neck colour and pink wash to the underparts which is more evident in summer plumage.

More images of this and some of the other gulls on show at the weekend have been added to the latest images gallery.