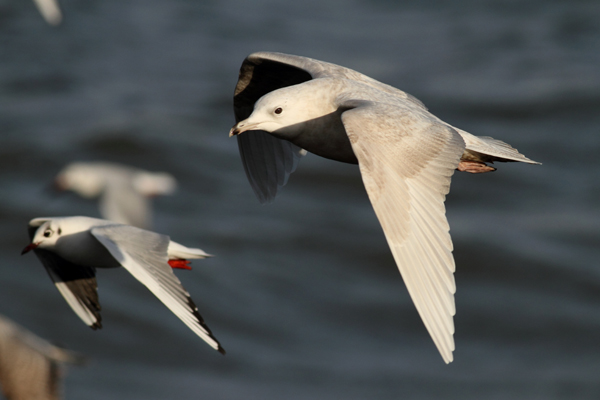 Iceland Gull, Antrim Coast
Northern Visitors
Over Christmas I was thinking it has been a few years since there has been decent numbers of Iceland and Glaucous Gulls in Northern Ireland. The winter of 2011-12 appeared to be going the same way. I was checking the outfall near "Marconi's Cottage", Portrush and the River Bann in Coleraine on a regular basis and apart from the occasional sighting of an Iceland Gull near Ramore Head all seemed quiet.

That all changed just prior to last weekend. Gales on Tuesday and Wednesday heralded an invasion of these white winged gulls. Birds were showing up all along the north and east Antrim Coast and I easily seen double figures last Saturday, whilst looking for an even rarer gull - an adult Bonaparte's Gull from North America (see latest images).

Birds seemed to be dropping in then moving on, which may mean even more birds were involved than what was being seen. Whilst watching the Bonaparte's for a couple of hour three different Iceland Gulls were seen.

At least one Iceland Gull remains around Ballycastle Harbour often to seen at the mouth of the river at dusk. If you want to see these birds head to the coast and landfill sites soon!

It wasn't just the north of Ireland that experienced this invasion. I understand there are at least 30 birds at Marwick Harbour on Orkney.