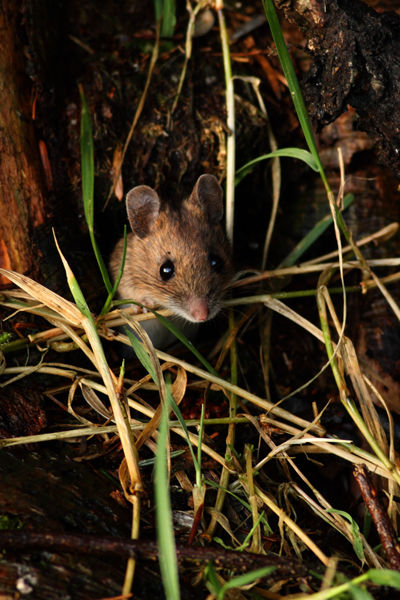 Wood Mouse, Ballycastle
Little Beasties
It would appear that peanuts put out for the Red Squirrels have attracted a few other visitors (that I know off). Whilst spending hour cooped- up in my little hide I have noticed another little beastie making the most of the free food and mild winter.

I had noticed a few little holes at the base of an old tree stump but until this week I hadn’t seen who was living in there. As I suspected it is home to at least one Wood Mouse and slowly but surely it is becoming accustomed to my presence in the forest and has been putting in more and more daytime appearances.

I have photographed birds, dragonflies and butterflies in flight but nothing prepares you for the speed that these little guys can move at. They dart out grab what they want and disappear again before I generally have got my eye to the camera never mind pressed the shutter release. With patience and concentration though it can be done, especially if you make sure the food is a little way from the hole.

Found throughout the British Isles this is our most common mammal, feeding on a wide range or nuts, seeds, plants and insects. Most adults do not survive more than a year especially in hard winters. They differ from house mouse by having much longer ears, hind feet and tail. They are an important prey source for birds of prey, foxes and stoats. In fact this friendship was almost short-lived following an attack by a Sparrowhawk which spotted it after narrowly missing a Coal Tit.