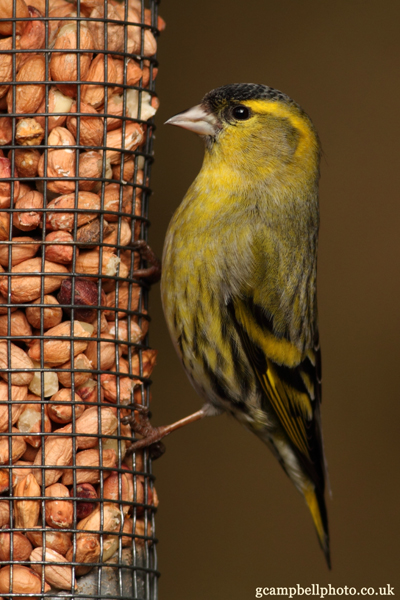 Male Siskin, Ballycastle, Antrim
Another Species for the feeding station
Last week I suffered with a bad flu hence the lack of updates. By Sunday though I was feeling a little better and with the sun out and spring like temperatures I ventured up to the feeding station for a couple of hours.

The Chaffinches and Coal Tits put on a nice display in the warm morning light, joined by the occasional Blue Tit, Great Tit, Dunnock and Robin. After about an hour the Squirrels showed up but as is often the case they didn't venture onto the ground.

Above me in the trees I could occasionally hear the twittering call of Siskins, a noise that I have heard more at the feeding station in recent weeks. Then there was a flutter of wings outside the hide and a beautiful male Sisken landed on the nut feeder, followed soon after be a female. For about 15 minutes they feed and flitted around and I managed to get a few nice shots on the feeder.

I will rearrange the perches around the nut feeder in the hope of getting these beautiful little birds on a more natural perch.

Siskins are birds of both conifer and broadleaved woods where they feed on seeds, especially alder and spruce. In some winters large numbers of these stunners will move south though this year I haven't seen so many. In recent years this species has increasingly visited garden feeders, seemingly in my experience attracted to red plastic nut bags.

The photo here is of the brighter male bird whilst the female can seen in the latest images gallery.