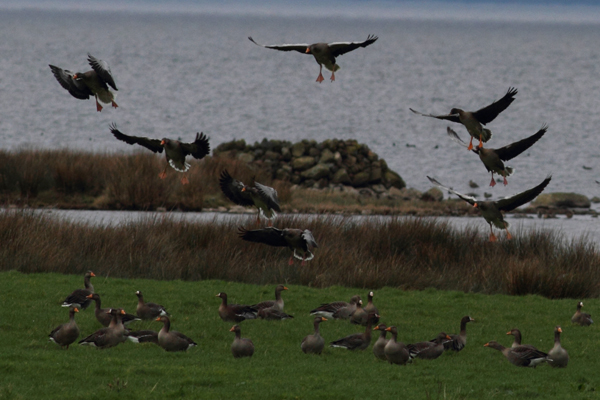 Tundra Bean Goose, Lough Neagh
Rare Birds from the East
A combination of a mild winter here and severe weather in continental Europe has made Northern Ireland a haven for some unusual wildfowl. In recent weeks there are a number of unusual geese which we would not normally see here.

Last week I was lucky enough to be working in areas where I got a chance to catch up with some of these and other rare birds. With improved weather and later sunsets I was able to stay after work in the North Armagh area to watch a sizable goose flock in the Ardmore/Reedy Flat area. Greylag geese made up the vast majority of the birds seen but amongst them were about twenty of so White-fronted Geese.

We regularly get Greenland White fronted Geese here but closer inspection should that these birds had pinkish bills, characteristic of the Russian or European White fronted Goose, quite a rarity here.
Whilst looking through the flock another small skein came into land. Again the majority of the birds were Greylags but I noticed three different birds. Two were Pink footed Geese and the other a rare Tundra Bean Goose. The latter bird is another from northern Russia region and has appeared in relatively good numbers in Ireland this year. See image (upper of three birds in flight on right)


At nearby Oxford Island there is also a drake Red Crested Pochard of unknown origin which moves between here and Lurgan Park Lake.

Another visit to the Ards Peninsula in east Down allowed me to make an early start to check for a few rarities en route. At Anne’s Point on the shores of Strangford Lough another four European Whitefronts which unfortunately I didn’t see. However nearby another rare bird has been seen a Rough Legged Buzzard. After some careful checking of the Chapel Island area with a telescope I found a large raptor – a Common Buzzard. Scanning a little further south a Buzzard on a fence post. The appearance of this bird had me interested immediately.

As I watched the bird move around and the tail became apparent as it preened in the early morning sun. The bird was paler around the head than the Common Buzzard and tail was whitish with a dark band, giving white rumped appearance. Not the best views, but I was happy with the identity of this bird. I could wait any longer to see it in flight, so it was off to work.