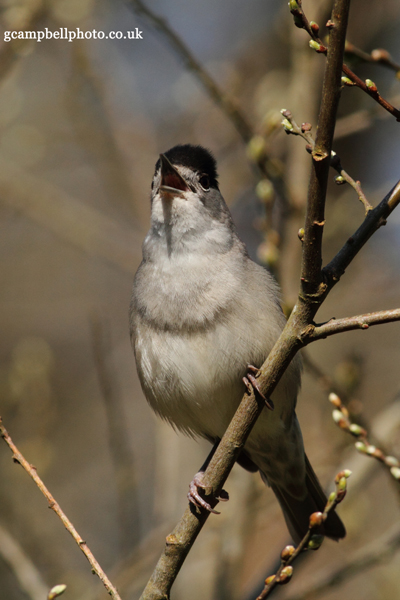 Male Blackcap in Song
Northern Nightingale
Spring migration is well under way and there are a wide range of summer visitors to be seen and heard in North Antrim. Swallows, Sand Martins and House martins are becoming more frequent sights every day and Swifts can’t be far behind. The SandwichTern can be seen in Ballycastle Bay and seabirds are back to the seas around Rathlin.

This year however I am wishing to improve my warbler shots and try and get some of the species I haven’t managed to get images of yet. Willow Warbler are calling all over the place from almost every woodland edge, patch of scrub and hedgerow tree. One of the first warblers to arrive, the Chiff chaff are proclaiming their territories from the tall trees.

One of the more common species which I have struggled to get a decent image of though is the Blackcap, so this spring I have been making a special interest. These lovely songsters are not overly rare but they seem to evade my lens for a reasonable shot. That changed on Saturday when after a few hours of trying a beautiful male decided to sit in a willow bush in front of me and sing in the hope of attracting a mate.

The male has the distinctive black head, giving it it’s name, whilst the female has a chestnut brown head. The wonderful fluting call has earned it the nickname the “Northern Nightingale”. Breeding birds arrive here from late March and remain until September before moving south to North West and western Africa. They are often found woodland, scrub and gardens, normally where there is dense cover, such as Rhododendron.

Increasingly Blackcaps have become winter visitors with birds from North east Europe and Germany coming to the British Isles as those which bred here move south. In fact I had my first one in my garden briefly during the past winter.