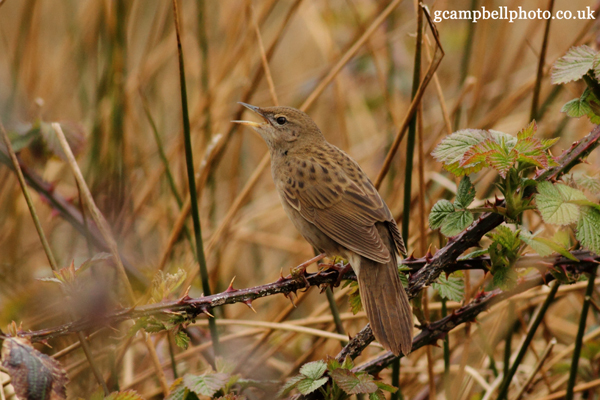 Grasshopper Warbler in Song
The Gropper
Last week I was surprised to hear a Grasshopper Warbler in North Antrim already, I was even more amazed that there were two of them, and then shocked that I managed to get close to them to get a few shots before they disappeared into the undergrowth.

These are one of our most secretive of summer visitors, more often heard than seen. Their insect like reeling call is the best give away to their presence. This is a sulking species, often crawling and running through low vegetation, almost mouse like, making it hard to find even if you think you know where you heard it. A good look to look in Northern Ireland is around new conifer plantations with wet grassland nearby.

These birds winter in western Africa, with observations from Senegal suggesting that the birds start their return migration in early February. They migrate at night and sometimes can become casualties of flying into lighthouses on migration.

The Grasshopper Warbler is Red List species following a population decline of more than 50 per cent over the last 25 years.