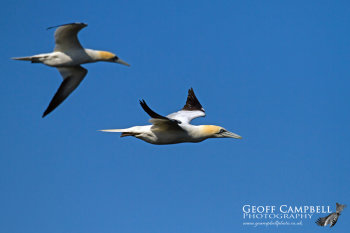 Study into disturbance to Gannets points finger at photographers
Worrying Study from The Saltees, Co Wexford.
A study by University College Cork has demonstrated a negative correlation between the number of Gannets being displaced from their nests and the minimum distance of approach by visitors, especially those who got within a metre of the birds. This appears to have resulted in a decline in nest success, with less chicks being successfully fledged in the higher disturbance areas of the colony. Most visitors who approached the colony were photographers and photographers were found to the be only group to get within this one metre zone.

The placement of signage did change the behaviour of some visitors, but it is worrying that so called "wildlife photographers" needed to be told not only of the legality, but the threats of disturbing breeding birds. I am concerned at recent increase in the number of photographers with big lenses who often have no idea what they are photographing, let alone the ecology of their subject or the potential impacts in terms of disturbance or changes in natural behaviour, but only see wildlife for their entertainment or as a commodity to be sold.

There are plenty of excellent photographers who have taken the time to study their subjects and considered the potential ecological risks, but from my experience there is an increasing number who have no idea what they are doing or worse simply don't care. In recent years I have observed birds being "pushed into the light" and deliberately flushed for a better image or an action shot, rarities followed for hours by groups of birders and photographers, sometimes through sensitive habitats, as well as the long term use of supplementary feeding until natural hunting or foraging behaviour is altered for generations.

The effects of human disturbance on Northern Gannets