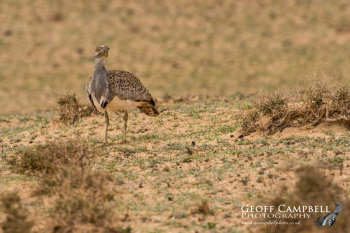 A short winter break - but will there be any birds or sun?
I am pretty sure my family picked Lanzarote for a short winter break to celebrate my sons tenth birthday due to the reported lack of birds. I simply took this as challenge.

Leaving Belfast early on Saturday afternoon we would only be getting the last of the evening light as we transferred from the airport to Costa Teguise for a four night stay. By all reports the recent weather had been very poor and spots of rain on the coach windscreen as we rounded the capital, Arrecife, did not fill me with confidence. By the time we arrived at the hotel it was dark and with one White Wagtail and lots of feral pigeons and Collared Doves on the short commute to the hotel perhaps Lanzarote would live up to it's reputation.

Given the limited time available I had pre-arranged a birdwatching tour with local company eco-insider for the Sunday morning. Up early I was disappointed to see lots of cloud and wind, but at least it was dry. I was picked up promptly at the hotel at 8am before traveling south to the village of Tias to be joined by a lovely couple from Pembrokeshire. Adolfo, our guide for the morning, took us in the Land Rover to the western side of the island the "desert area" of the Teguise Plain/El Jable. He explained that the normal rains from October to December had failed, but in January and February had been very wet, and as a result the "desert" was very green. A single Cattle Egret, Spanish Sparrows and lots more pigeons and doves were seen on the journey across across the island, before Adolfo pulled off the road close to a agricultural factory and parked up. This is where the tarmac part of the trip ended and real birding started. Whilst Lanzarote may not have many birds, it does have some very special ones, and these were the objective of this tour.

As we sat and our guide explained the itinerary, the first birds I observed were a couple of Berthelot's pipit, a species only found on the Canary Islands and Madeira, which I have previously seen on Fuerteventura. As I scanned the vegetation I picked up one, then two, then lots of Stone Curlew, some quite close to the Land Rover. The Canary Islands nave two subspecies of Stone Curlew, with Burhinus oedicnemus insularum on the eastern islands, and may become a separate species in the future. We had barely left the road and already one of the three key species had been seen. Click on images to enlarge. 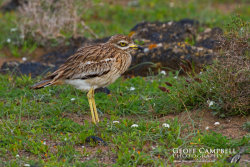 The light had improved a little as the clouds started to break, and it was at least warmer than home, but the cooling wind remained. Setting off down a track we seen more pipits and stone curlews and the first Southern Great Grey Shrike of many landed nearby. Checking the smaller birds as we traveled quickly produced our first Lesser Short toed Lark by the side of the track. While stopped to watch lark and stone curlew I spotted the main species I want the see, the Houbara Bustard. This site is a key place for this species and particular the sub species Chlamydotis undulata fuertaventurae, with 140 individuals. 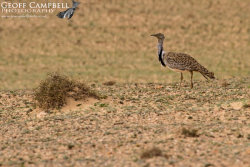 I had failed to see this large bird on Fuertaventura, more than 10 years ago, so it was great to finally catch up with one and by the end of the tour we had seen at least six, including one displaying male.

Two of the big three seen one to go! As we continued west quite quickly the habitat changed to a much more sandy nature, blown from from dunes on the west coast. Excellent views of Canarian Kestrel (Falco tinnunculus canariensis) and Canarian Raven (Corvus corax tingitanus) were had in this area (more on the later species in later post). 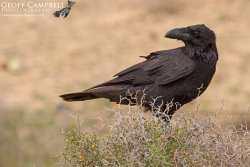 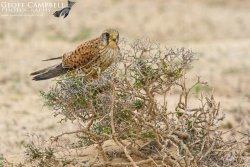 Whilst stopped to observe another Houbara I picked up the third of the "big three". First one, then a second and with the help of Adolfo in the end four Cream Coloured Courser (Cursorius cursor), a wader which breeds in these desert like conditions. They are very difficult species to pick out and thankfully they walked across the track allowing all to see them. 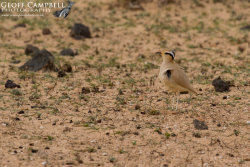 A short break in the village of Soo, with coffee and a snack, and then we checked out the area around the houses and gardens, adding Hoopoe and another special little bird the Trumpeter Finch which were feeding with the sparrows, but sadly they didn't come close enough for anything other than record shots. The recent weather meant that some of the migrant passerines were less easy to locate, but a few White Wagtails were seen. A return through the desert to the original starting point was less fruitful, as usual wildlife activity drops of by midday, though this is not helped by the illegal offroad vehicle and motorcycle use in this protected area.

I can very highly recommend this enjoyable tour put on by Eco-insider as they will sensitively take you to areas a hire car will never get to, with excellent ecological, land management, historical and other information about Lanzarote, it's people and nature supplied by Adolfo. All of this and back to the resort by 1330.