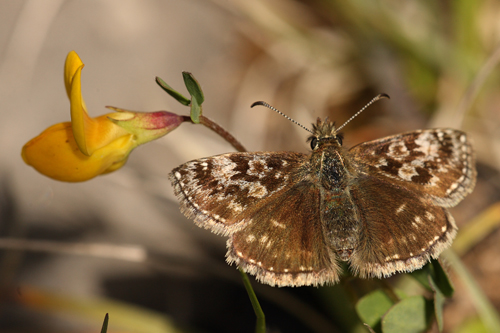 Dingy Skipper, nr Enniskillen
Lows and Highs of a day in Fermanagh 2
Following the sad discovery of a killed Pine Marten on journey down I was hoping that if the weather held I may get a chance to photograph some butterflies in my lunch break and after work before heading home.

I wasn't to be disappointed. The first highlight was finding a small colony of the threatened Marsh Fritillary butterfly close to Lough Navar forest. They were frequenting a small fen area along side an upland lough. Also seen were Cinnabar moths and Four Spotted Chaser dragonflies.

A roadside verge just outside Enniskillen produced double figures of the rare Dingy Skipper butterfly, together with a Real's Wood White. Burnet Companion moths were everywhere and a single Narrow Bordered Bee Hawk moth was seen, though it wouldn't stay for a photograph - next time!