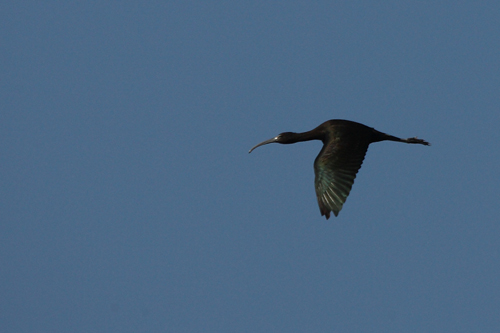 Glossy Ibis, Wexford
Wexford Summer Trip - Part 5
Having failed to see the Glossy Ibis on Saturday I revisited Tacumshin. The areas where birders had shown me the bird liked to frequent were all clear. Plenty of small waders, a ruff, numerous egrets and lots of duck but no ibis.

Walking further around the shore to the east, there it was, unfortunately silhouetted against the morning sun. So back to the car and round to next access point. A quick walk and it was relocated. I slowly tried to approach the bird and just as I got close enough for a few shots I disturbed an Oystercatcher hidden by the vegetation. As it took off, calling, the Ibis lifted, flying off without even a decent record shot. Just as the egret did early on it turned and right flew past me (though not as close!) and landed further around the shore where it continued to feed.