Plenty of Wildlife Around 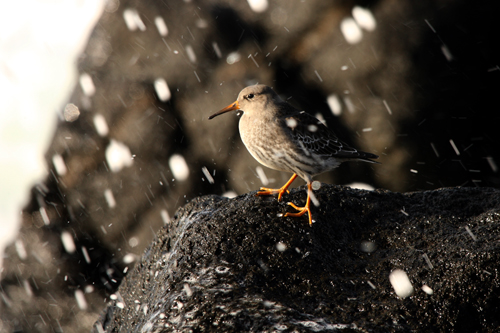 Purple Sandpiper gets a shower - Portrush, Antrim
Winter Gets Closer but Summer Wildlife Clings On
The putting back of the clocks has happened for another year and we draw closer to mid winter. Yesterday, though, a frosty and misty start gave way to a glorious day with a few surprises along the North Coast.

A morning walk at Springwell Forest near Colerain produced a dozen Crossbills high the tree tops and usual array of forest birds. The biggest surprise though was a female Moorland Hawker still on wing (well what was left of her wings) along one of the streams. A Kestrel and several Buzzards were also noted.

By lunchtime things had warmed up and I had made way around to Portrush. The Med Gull and Ring billed Gull remained at the East Strand car park, joined briefly by a Small Tortoiseshell butterfly flying amongst the cars, probably awoken from its hibernation by the sun.

At the Landsdowne car park there were plenty of waders on the rocks including Purple Sandpipers, Turnstone, Redshank and Oystercatchers avoiding the waves as they crashed against the shore.

Sunday morning was another cool start though a little cloudier than Saturday. A walk with my two year old son on Cushendun beach was rewarded by more than 30 Bottle nose Dolphins passing south just offshore. Associating with them was a tern, which appeared to be a Common Tern, in summer plumage. Common Terns should be off West Africa by now and not in breeding plumage – so an interesting sighting.