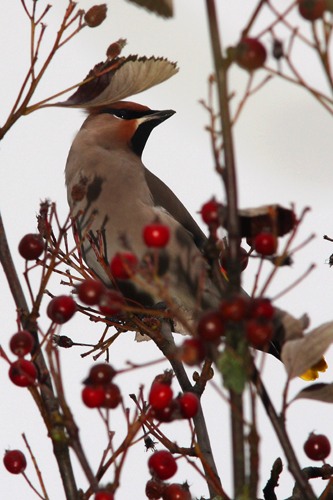 Waxwing, Ballycastle
Well a scouting mission
With flocks of several hundred Waxwings gracing our neighbours in Scotland sighting in Northern Ireland have been relatively scarce. A few flock were reported moving through a few weeks ago but they don't appear to have stayed around.

At lunchtime today (Thursday 4th) I found one lone bird feeding on berries close to the middle of Ballycastle, first at Quay Road before it moved to Atlantic Avenue. In poor light, rain and wind the bird wasn't making it easy to get a decent photograph by staying at the top of the bushes.

There have been reports of the male Goosander still being seen on the river in Ballycastle over the past few days.